When Susan Bennett, then the director of the Canterbury Shaker Village museum, hired me to write a history of the village, her vision and mine aligned perfectly: Let’s tell the stories of the people who built and devoted themselves to a thriving utopian community for 200 years.

In Union is the result. Published in June 2019 in celebration of the museum’s 50th anniversary, it’s offered for sale at the village as a souvenir.

Although I wrote the 35 pieces that fill its pages, In Union — like the village itself — was very much a communal effort. I met regularly with the museum archivist and interpretations manager to brainstorm themes and content ideas for each of village’s five historical eras. They mined the village archive for material while I deepened my grounding through secondary research. A former newspaper colleague designed the booklet, and a talented photographer took contemporary images. The revision process involved many hands and yielded a much improved result. 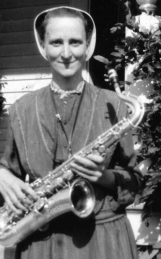 The Shakers were at heart a radical sect — dedicated to celibacy, gender equity, pacifism and a communal life intended to bring about nothing less than Heaven on Earth. They stare from 19th-century, black-and-white photographs like stiff and somber specters. But In Union, like this 20th-century image of Sister Marguerite Frost and her impish grin, seeks to capture a fuller reality — portraying Canterbury’s Shakers as the very real people they were. And in these fractious, turbulent times, doesn’t the story of people who chose to dedicate themselves to each other and to beliefs bigger than they were — to live In Union — have something to tell us all?

In Union is available through the Canterbury Shaker Village.